Home NBA Dulquer Salmaan thanks the Hindi film audience for the success of the...
NBA

Dulquer Salmaan thanks the Hindi film audience for the success of the film Sita Ramam, ‘Many thanks to the audience and Hindi media’ 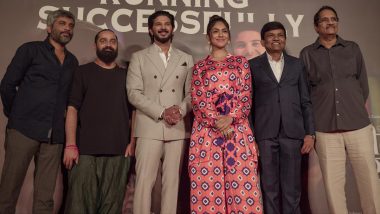 Dulquer Salmaan on Sita Ramam Success: Dulquer Salmaan, who played the lead role in director Hanu Raghavapudi’s critically acclaimed romantic entertainer, Seetha Ramam, has thanked Hindi audiences for the love they have showered on his film. Taking to social media, Dulquer wrote, “A big, big thank you to the heartfelt Hindi audience for the love they have shown towards the Hindi theatrical release of Sita Ramam.” Huma Qureshi remembers time spent with Madhuri Dixit in ‘Dedh Ishqiya’, ‘I used to watch her performance and couldn’t take my eyes off her’

“The love keeps growing and growing every day. And so much love and gratitude to the Hindi media across the country for giving visibility and support to the film.”

The film, which also got a good opening in the Hindi belt, has already been declared a big hit in Tamil, Telugu and Malayalam.

The emotional love story in the midst of war has given the audience a unique and surreal experience.

Outstanding performance by Dulquer Salmaan and Mrunal Thakur in lead pair, writing and direction by Hanu Raghavpudi, music by Vishal Chandrasekhar, and music by P.S. Vinod’s astonishing scenes, all have received praise from the people.