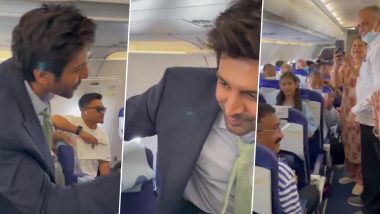 Mumbai, 20 September: Except business class in a flight, Bollywood actor Kartik Aaryan traveled like a normal passenger in economy class. Actually, a video of Karthik has been doing the rounds on the internet, in which the actor is seen traveling in economy class to come back after attending an event in Jodhpur. Kapil Sharma’s film Zwigato is ready for Busan International Film Festival, directed by Nandita Das This film is based on the former floor manager

In the clip, Kartik is seen meeting and greeting passengers on board the plane.

During this, people can also be seen clapping and praising him for his performance in his last release ‘Bhool Bhulaiya 2’. The film has proved to be a blockbuster at the box-office.

, #BhoolBhulaiyaa2 Bahut achchi thi,” passengers go berserk and shower praises to KA, as he flies in economy class and gets everyone super excited ️#KartikAaryan pic.twitter.com/RJC6Nhw9Xf

This is not the first time that Kartik has done this. He was seen traveling in economy class during the promotions of ‘Bhool Bhulaiyaa’.

On the work front, Karthik has several films lined up like ‘Shehzada’, ‘Captain India’, ‘Aashiqui 3’ and ‘Satyaprem Ki Katha’.

Share
Facebook
Twitter
Pinterest
WhatsApp
Previous articleMexico reports earthquake damage to its cultural heritage
Next articlePriyanka Chopra spoke about the rights of children in the United Nations General Assembly, ‘If we keep doing what we have done, we will get what we have got’