Home NBA Raju Shrivastava: The eyes of the country became moist in the memory...
NBA

Raju Shrivastava: The eyes of the country became moist in the memory of Raju Srivastava, who made people laugh and laugh, Gajodhar Bhaiya, who was active in many other works besides comedy 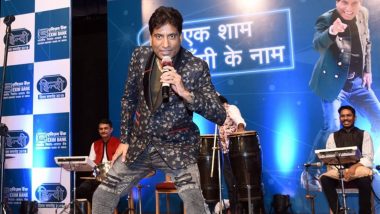 Raju Shrivastava: Comedian Raju Srivastava popularly known as Gajodhar Bhaiya, the king of domestic, clean comedy, is no more. He breathed his last on 21 September at Delhi AIIMS. Raju Srivastava, 58, suffered a heart attack on August 10 while working out.

On the death of Raju Srivastava, from Prime Minister Narendra Modi, celebrities from all walks of life have mourned. When Raju Srivastava was on ventilator in AIIMS, Prime Minister Modi and Uttar Pradesh Chief Minister Yogi Adityanath had visited the family members and wished them well. Film actor Amitabh Bachchan also sent his message.

If we talk about Raju Srivastava’s comedy, then his style of making people laugh was very different from today’s era. He was mostly famous for telling humorous satires based on common man and small everyday incidents.

Father a popular poet of Kanpur

Raju Srivastava was born on December 25, 1963. Raju’s childhood name, living in Unnao district of Uttar Pradesh, was Satya Prakash, but the world knows him as Raju Srivastava. Raju’s father was a popular poet of Kanpur and used to entertain people with his humorous and satirical poems. Raju was fond of comedy since childhood.

The journey of Mayanagari was not easy

To make people laugh with his comedy, Raju also rolled a lot of papads. Raju came to Mumbai to fulfill his dream, but it was not as easy as he had imagined. Here he had to spend a life of poverty for many days. Even Raju drove an auto to fill his stomach. He probably did not even dream that he would get a career while driving an auto. In fact, he got his first break because of a ride in his auto. After that he gradually started getting live comedy shows, for which he used to get a fee of Rs 50.

When the world knew Gajodhar Bhaiya

Raju Srivastava started his career with the TV show ‘Tea Time Manoranjan’ but got his real identity from the show ‘The Great Indian Laughter Challenge’. In this show, he showed such colors of the culture of Uttar Pradesh that people burst into laughter. In this show, he also introduced the character named ‘Gajodhar Bhaiya’ to the world. Although Raju was the runner up in this show, but the audience gave him the title of ‘The King of Comedy’ at the same time.

Worked in many films also

Srivastava has worked with famous musicians like Kalyanji Anandji, Bappi Lahiri and Nitin Mukesh in India as well as abroad. Raju Srivastava acted in big budget films like Maine Pyaar Kiya, Baazigar, Aamya Athani Kharkha Rupya, Main Prem Ki Deewani, Big Brother. He tickled everyone in the house for almost two months by participating in Bigg Boss 3. Till the time Raju was a part of this show, its TRP was very high. People kept enjoying his spot response and mimicry fiercely. In 2013, Raju participated in Nach Baliye Season 6 with his wife Shikha Srivastava. People appreciated their pair very much. Raju Srivastava, during one of his live comedy shows, tickled people by reciting a punch on underworld don Dawood Ibrahim and Pakistan, but after this show he received threatening calls from Pakistan and warned that they should not do any kind of comedy on them.

Be a part of ‘Clean India Campaign’

To cash in on Raju’s popularity, the Samajwadi Party (SP) fielded him from Kanpur in the 2014 Lok Sabha elections, but on March 11, 2014, Srivastava returned the ticket saying that he did not get enough support from the party’s local units. Used to be. He joined the Bharatiya Janata Party on 19 March 2014. PM Modi also nominated him to be a part of ‘Swachh Bharat Abhiyan’.

Raju Srivastava, the uncrowned king of the world of laughter who tickles people all his life, has left this world leaving his loved ones. No one can ever forget his unique style of giving humorous color to the simple life of the villagers.

Akshara Singh’s Bhojpuri Navratri song ‘Chausath Joginiya Mai’ released, such a form of the actress seen in the avatar of Goddess (Watch Video)

the journalist Alicia Ortegafrom The Report with Alicia Ortega and Noticias SIN, will participate in the conference International “Investigative journalism in the 21st century”,...
Read more

Akshara Singh’s Bhojpuri Navratri song ‘Chausath Joginiya Mai’ released, such a form of the actress seen in the avatar of Goddess (Watch Video)

the journalist Alicia Ortegafrom The Report with Alicia Ortega and Noticias SIN, will participate in the conference International “Investigative journalism in the 21st century”,...
Read more